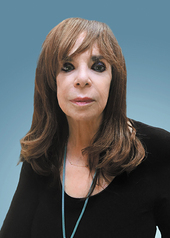 Laura Boss was an American award-winning poet. She was a first prize winner in the Poetry Society of America’s Gordon Barber Poetry Contest. She was the sole representative of the United States at the XXVI Annual International Struga Poetry Readings in Yugoslavia. Awards for her writing also include an American Literary Translators Award (funded through the National Endowment for the Arts), and three Fellowships in Creative Writing (Poetry) from the New Jersey State Council on the Arts. She received the first International Poetry Award at the International Poetry Festival at Swansea, Wales (sponsored by Cross-Cultural Communications and Seventh Quarry Magazine of Wales).

Her six collections of poetry include  Stripping (Chantry Press, 1982), and the award-winning On the Edge of the Hudson (Cross-Cultural Communications, 1986). Her book, Reports from the Front (CCC, 1995) was nominated for an American Book Award.  Arms: New and Selected Work (1999) and Flashlight (2011) are both published by Guernica. The Best Lover (2017) and her posthumous seventh collection, Family Promises (2021) are published by NYQ Books.

Her poetry has appeared in The New York Times and in the anthology The Poets of New Jersey: From Colonial to Contemporary (Jersey Shore Publications). In 1998, her manuscript was a finalist in the Poetry Society of America’s Alice Fay Di Castagnola Award.

Laura was the founder and Editor of Lips poetry magazine for four decades.

She gave readings at the United Nations, the Dodge Poetry Festival, Princeton University, the New York Public Library, the Folger Shakespeare Library in Washington, DC, and numerous other venues.

A long time Dodge Poet, Laura led sessions for many years in their “Spring & Fountain” program for teachers.

In 2014, Laura co-edited with John Gallaher, Time Is a Toy: Selected Poems of Michael Benedikt (University of Akron).

Laura Boss died on April 9, 2021, after a courageous battle with pancreatic cancer.

Her son, Barry, has formed the Laura Boss Poetry Foundation to continue Laura’s Lips poetry journal and to also offer an annual manuscript pize and other projects that continue the poetry spirit of his mother. For current information, go to laurabosspoetryfoundation.org